Ancient wooden floors, especially those that have preserved their original look till present, are true evidence of construction skill. They carry esthetic ideas and reflect artistic perception of the world and technical opportunities available at the time when they were created. While enjoying beautiful flooring we seem to turn to the past and interpret this past in our own way. Only when each new generation has an opportunity to interpret its past in its own way this past begins to belong to them.

The basic principle when treating 200-year-old parquet is minimum intrusion into its structure and laying technology. Parquet restoration is a complex and labor-consuming process. Unskilled intrusion may alter historical content of ancient parquet flooring in such a degree that it will become lost for the future.

Parquetry layer begins restoration with a documented description of the discovered state of ancient timber floor structure. Interfloor timber beam structures of ancient buildings require constructional and physical concept of the building to include a ventilated and vapor-permeable overlapping system.

The basic principle of restoring underlaying structures is to repair the existing flooring underlay or, if such a repair is impossible, to install a new underlay made of solid board for the parquetry to be laid above. One cannot use timber substitutes such as veneer or chipboards in any case, as their service life is limited. Serious discrepancies from the original technology of creating underlaying structures may destroy historical background. Only a top expert shall repair parquetry of such a level.
Polishing, scraping, and lacquering of ancient floors with modern lacquers remove the signs of previous treatment completely and thereby ultimately destroy the basis on which former means of wood surface treatment and finishing are perceived. Floor polishers cannot be used to treat the surface of ancient floors that present great artistic value. The heat evolved while machine polishing can destroy adhesive bonding and damage the flooring permanently.

To satisfy customers' requirements and fantasies designers and parquet producers turned to the legacy of the past. The appeals of historical monuments of XVIII - XIX centuries made the basis for modern production of complex marquetry, borders, sophisticated rosaces and parquet ageing for it to correspond to any interior style. Durability of parquet floors depends not only on the quality of their materials and elements, careful installation, and adhering to application conditions, but mainly on their repairability. Items that cannot be repaired usually have a short life (one may call them disposable).

Parquet repair can depend on a variety of factors and contain requirements to restore not only its functionality but also esthetic characteristics.

When and why the necessity to repair parquet floor intended to serve 100 years or more arises? 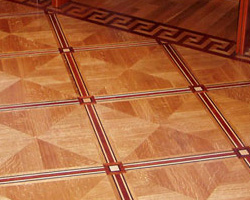 It always means regular lacquer change that needs to be done every 5 -10 years.

Average duration of the stated term can vary much depending on load intensity, household composition, and even on the breed and number of dogs living in the house. One shall not admit parquet lacquer covering to rub out completely and consequently to have trails on the lacquer surface. This means that the time has come to polish and lacquer the floor again. This protect, renew and renovate your beautiful natural wood parquet floor.

Polishing removes a part of lacquer coat. If the floor is visibly damaged by marks of spike hills or hollows made by dropping heavy objects or chairs (placed in a wrong way, as they should have special felt material on their legs or special carpets) thin wood layer of 5 mm is also removed. The service life of parquet floor is defined by the thickness of parquet block wearing surface (7 mm for 15-16 mm parquet) and under conditions set above can be 70 – 100 years and more. Careful superficial polishing as opposed to rougher scraping can prolong the life of your floor. It shall be performed using all auxiliary tools and dust collectors to protect walls from dust. The work shall be done as carefully as possible, as it usually takes place in dwelling rooms where subsequent repair is not stipulated.
While polishing furniture that will not change its place shall not be touched and one shall get round it along the perimeter with belt senders. This will save your furniture, speed up polishing process and make the works cheaper.

While polishing parquet floor you may change lacquers, prime coaters, etc. Floors may be coated with more dark varnish that brings out the natural grain and colour or vice versa. The floor can be made luminous or matt. Wood tinting can also be performed. The only thing you can not change is pattern. Therefore, it is important to choose the right pattern at the initial stage of your apartment design. It is also important to choose radial or tangential sawing of the wood that you will like.

If you choose oils or wax as a protecting coating (instead of a lacquer), you will never need to polish your parquet floors. But you will need to take care of your floors more often and to wash and clear the floor once a half of a year. You will need to wax and oil your floors and to use care products approximately once a week. However, comfort made by such flooring will exceed your expectations.

A serious reason to repair parquet floor is violation of its integrity, local leakage causing parquet deformation on a small section, necessity of alterations, door change, wiring installation (caused by a necessity).

Those who wish to eliminate this defect partially by changing separate parquet blocks should understand that it is impossible to find parquet of the color and tint to fit the rest of the floor. New blocks will be darker or lighter and will differ more after lacquering. Even if the most provident owners provide themselves with 1 – 2 meters of parquet remaining after main installation it will not help them. This parquet will always differ by its color and tint. The color of wood changes with time and (in different ways if lacquered or not) it does something like patinating if to use silver and bronze terminology. Changed places will look like new clean patches instantly or some time after.
One can get out of the situation by laying artistic border or a part of parquet artistic module on the place of partition. Artistic rosace may be installed in the partially flooded place. In any case, such a measure will allow masking the evidence of the incident and making people think that such a decoration has been stipulated from the very beginning.

If the damage is serious and touches substantial part of the floor in the premise (room, hall or passage) the only right decision is to change the floor completely. It goes without saying that the cause of the problem that occurred shall be ultimately eliminated.

It is very important to dry the premise and to check the humidity of underlayment with instruments before starting flooring. Air temperature and humidity in the premise shall also be checked to meet the requirements. Season changing accompanied by changing of average temperature and humidity in premises usually causes development of minor slits between staves in dry winter season (relative humidity is 30-40%) and coupling of staves in humid summer (relative humidity is 70% or more). For quality parquet floor such changes are almost invisible and do not cause problems. For parquet floors which laying technology was not observed or which were laid using defective materials (glue, lacquer, etc.) such changes usually became hard tests for durability and fastness. Usually parquet laid in a bad way grits and bloats in the first year. Such parquet floor usually cannot be repaired but only completely changed.

Underdried and overdried parquet also causes problems. Damp parquet dries intensively in premises with low humidity and substantial slits are formed between staves, sometimes being accompanied by lacquer coating breaking. In premises where humidity is high this parquet can expand and deform its laying.

If parquet underwent forced drying inner and surface tensions can cause slits. They are seen already when parquet is bought, unfortunately their number increases with mechanic and climatic loads. In such parquet slits between staves, bloating, warping and cracking appear already in the first year.

Do not worry if such things have occurred and do not try to eliminate them with spackling, repolishing, etc. Remember how to take care after parquet floors. Pay attention to microclimate in your premise. 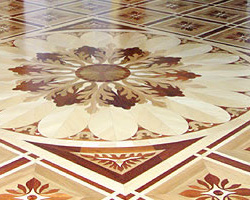 Create favorable conditions for your parquet: humidity 45-60% and temperature 20-23 C. Probably you have an increased humidity (many flowers, wrong work of moisturizers, etc.) or on the contrary your conditions are too dry (it may be caused by frequent airing or air conditioner). Humidity shall be controlled by means of hydrometer. Remember that the process of parquet alternation is very slow and inertial, and you will need more than one day to evaluate its progress. An effort to spackle or use various mixtures of glue and wood dust will fail or at best will produce cosmetic effect for some time.

Therefore, parquet response to moisture defines the sequence of repair works, including primary installation and parquet changing. Parquet is laid after completion of all the repair works connected with humidity, including tile works, painting of walls and ceilings, and wall-paper hanging. Installation of stretched ceiling connected with sharp temperature increase shall also be performed before parquet laying. The stated sequence can be altered only for serious reasons (it can be changed because of inconformity of microclimate in the premise). Experienced layers can respond appropriately in such a case.

Deformation of parquet floor is caused by its laying above wet screed. If underscreed is not vapor- and waterproof the source of moisture can as well be presented by condensate formed on the interfloor panel or water going by this panel when there are leakages in the neighboring apartments on the same floor and in the interpanel joints of the building.

Remember than when buying and laying previously lacquered parquet that seem to require no lacquering on your floor you leave joints between staves moisture-unprotected. Even minor leakage on the floor surface and careless usage of wet-dry suction cleaner not mentioning wet cleaning can cause deformation of stave edges. This disadvantage is also common for such parquet substitute as parquet board, as its large panels have oil or lacquer coats, but its joints are unprotected. It is mainly a characteristic of the so called “floating floors”.

To eliminate defects of parquet board connected with mechanical damages specials scratch smoothing mixtures or polishing pastes and oils are produced.

Common means and methods of floor treatment include vacuum cleaning, wet cleaning with a drained wipe and cleaning and polishing of wax floors using electric floor polisher. Fabric or felt decals on furniture legs will prolong the life of lacquer coats. Producers of new modern quality lacquer coatings produce special mixtures allowing cleaning and renewing lacquer surface if necessary. They can be bought in special stores with floor care appliances.